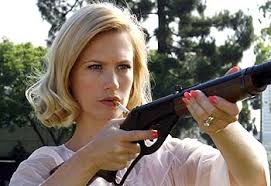 Last night on “Mad Men,” when Betty Draper saw that her daughter Sally had given herself a haircut, she slapped Sally across the face.  Later in the same episode, when she found out that Sally had been “touching herself in appropriately,” she threatened to chop off Sally’s fingers.

I don’t know about you, but for me, those moments are harder to watch than any of the show’s casually (or deliberately) sexist moments; I flinch with every inept or destructive thing that Betty does and I’m dreading the outcome of this particular plot line (my aunt thinks that maybe Sally’s grandpa was doing some inappropriate touching of his own…).  I’m also wondering what the hell kind of woman moves her second husband into the same house she lived in with Hubby #1–even into the same bed–but this post isn’t about a Betty character analysis.

Or rather, it’s about analyzing my own inner Betty–and my inner Betty isn’t a Grace-Kelly lookalike.

She surfaced this morning, when the boys were arguing about who had one particular Lego piece. One piece, among thousands. Accusations were hurled–you took that piece off my desk! I did not! You did too, you IDIOT!–doors were slammed, tears were shed. It was 7:45AM and I hadn’t even had my first cup of coffee.

Betty loomed yesterday too, on the (endless) jitney ride back from Easthampton, when the boys argued loudly about who got to use Daddy’s iPad as opposed to the iPhone; and then when the iPad was declared off limits, quarreled about which iPhone, Mommy’s or Daddy’s, was better; and then just for good measure tossed in a bicker-fest about which game was better.

Betty thinks, just for a flash, about SLAPPING a bickering boy to make him stop, or about threatening quarreling brothers with physical harm if they don’t just SHUT UP!

Now unlike the real Mrs. Draper-n0w-Francis, I manage to squash those impulses. Sometimes it means taking several deep breaths and going to stand in the bathroom behind a locked door; sometimes it means finding a way to make a joke and defuse the situation; sometimes (like on the jitney) it means hissing across the aisle to the boys that if they ever hope to use an iphone again they’d better just STOP.

TV Betty seems like an example of that generation’s loused-up, repressed (and repressive) parenting. But even so, a teeny little part looks at Betty’s slaps and threats and thinks, “gosh, that seems so easy.”

Maybe that  should be my new threat: “if you two don’t stop fighting, I’ll go Betty on you both!”