Here’s the thing about being a professor: your students stay roughly the same from year to year. Eighteen is eighteen is eighteen, more or less. And the same with the twenty-year olds, and with the about-to-graduates.  Yes, the particularities of dreams and ambitions, talents and strengths, vary from student to student, but in a general way, youth is youth.

Yes. Youth is youth, and every term, you sail further and further from those shores.  This term I realized – with something akin to horror – that I am in many instances probably older than my students’ parents.

Teaching: the only profession where you literally watch your past recede in front of your very eyes.  And, at the same time, it’s one of the only jobs (perhaps besides writer for The Daily Show) where what you do all day can keep you young. Or young-ish, anyway.  Watching students get excited about ideas can be contagious; their enthusiasm and interest and curiosity are better company than thinking omigod I’m almost fifty or how will we pay for college or will I ever write that damn novel or…well, you get the picture.  And because these students aren’t my actual kids, I don’t have to fret (much) about whether they’re eating right, or sleeping enough (or around), or what they’ll do for the summer now that their old bedroom has been turned into a home yoga studio.

No matter how the semester has gone—whether it’s been one of those magic semesters where everything clicks, or a semester where getting through the syllabus has felt like the Bataan death march—I am always sad to see the students leave on that last day. They have been mine, in a manner of speaking, for three months, and while sometimes they take another course with me or stop by to say hello, more often they do not.  It’s as if I got to see only a part of the movie, read only part of the story: I get one semester’s worth of their lives and then they go off and finish the story elsewhere.

When I was a younger teacher, I don’t think I felt such a sense of nostalgia at the end of the term, or maybe I did but I’ve forgotten that I did because see above on aging.

Wait–what were we talking about?

Oh, right. Teaching as a way of staying young. Or being reminded that you’re no longer as young as you were.

Here’s a reminder from a student’s essay this term – the student was talking about a reference in Alif the Unseen to a line from a “Star Wars’ movie (the first movie–the only one that counts, in my book–from 1977):  “This line is from the first “Star Wars” movie, in 1977. Although Kenobi’s Jedi trick has been part of pop culture for decades, it seems too much to expect us to know a line from a 70s movie.” *

Just gonna get my walker out of the closet and shuffle over here to the Betamax video projector and watch a little telly. Got some reruns of “Laverne & Shirley” I’ve been meaning to catch up on. 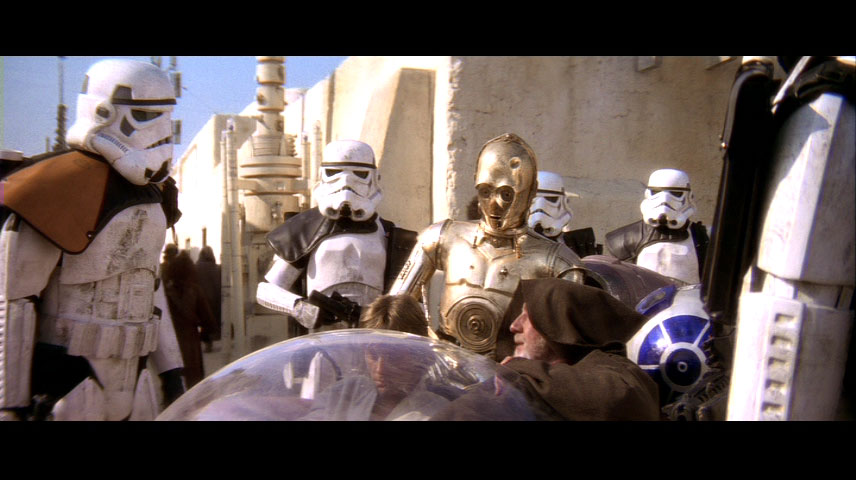 these are not the droids you are looking for…

*The student, by the way, wrote a wonderful paper (even if it did make me feel old as the hills, or Betamax) and got an A.