Today’s Times ran an article about Sharron Angle, who is running against Harry Reid in Nevada. Angle is the Tea Party candidate who has said that her candidacy is a mission from God.

Now, I dunno about the whole God thing–seems to me that God might have a problem with the Tea Party’s whole “screw the poor” attitude–but I will say this. In the picture that accompanies the article, Sharron looks like a Muppet: 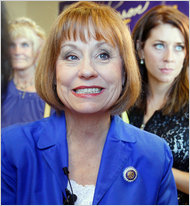 Except I’m thinking that on the whole, Elmo would probably be a much better candidate.